I am the handmaid of the Lord

Traditionally, this month is celebrated by Catholics as the month of Mary. It invites us to draw our attention to the person of Mary and her quality of discipleship. Mary is recognised and celebrated in her many facets, which we encounter through scripture, tradition and devotions.

Mary was woman and daughter, spouse and mother, disciple and companion. The start of the month places before us St. Joseph, carpenter and worker. We see little of St. Joseph in the scriptures, but we know that, like Mary, he listened to the Word and responded with an attitude that echoed Mary’s ‘I am the handmaid of the Lord, let it be done to me according to your Word.’ He took Mary under his wing, protecting and caring for her. He was guardian to Jesus, nurturing and facilitating his growth to young adulthood. He must have related to Jesus like any parent does.

As human beings, we live in relationship with all around us. What do we have to learn from Mary in this regard?

Mary was a listener. She listened for God, as we see in the story of the Annunciation. She pondered things in her heart and she responded accordingly. She reached out to others in need. She noticed the need of others, as she did in Cana, and reached out to them.

She recognised that being a disciple would involve pain and hurt. She did not shy away from discipleship, despite being told that a sword would pierce her heart. She walked the difficult path with Jesus even when some in the family thought he was ‘out of his mind.’ She stayed with Jesus as he was led to Calvary and stood at the foot of the cross. She felt that intense searing pain every parent feels when they have to watch their child die. She knew pain and suffering in her life. She still believed in the assuring Word of God that said to her, ‘Do not be afraid … The Lord is with you.’

These are the assuring words we need to hear echoing in our ears and hearts as we walk the path of discipleship. This is what we learn from Mary. She was gentle, she was strong. She was woman, she is mother. She was spouse, she is companion. She was handmaid, she is disciple. 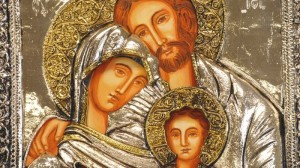 CONSIDER: Spending a quiet moment in prayer listening to this Ave Maria